In 1947, a piece of the Rock ‘n’ Roll puzzle was put into place. That was the year, at age three, that Travis Wammack’s family moved to Memphis, Tennessee. Born in Walnut, Mississippi in 1944, Travis was now in a place where Rock ‘n’ Roll would be developed. He was now in the right city at the right time with the right people and, with his ability to play the guitar, he would become part of the roots of Rock ‘n’ Roll music.

Travis began playing the guitar at age 8 and by the time he was 11 would be playing professionally in clubs around the Memphis area. Eddie Bond, a Memphis DJ who would record some rockabilly songs of his own, discovered Travis and added him to his band at that young age. In fact, he was so young that he became the youngest person to be voted into the musician’s union. He had to join this group so he could continue to play the club circuit. Also, at this time Travis had his first record – both sides being written by him. Those songs – “Rock and Roll Blues” and “I’m Leaving Today” – were released on the Memphis Fernwood label.

At age 16, Travis was approached by Roland Janes, who had played guitar on many classic Sun records including those of Jerry Lee Lewis. Roland owned his own studio and there with Travis they recorded 15 songs. This was 1961, but it would be 3 years before any of these would be released. In 1964, Atlantic Records took the rights to some of the recordings and released them on one of their subsidiary labels, ARA. This release would have a song that would become a hit and an inspiration for others, as we will see. The song “Scratchy” would hit the charts and climb to #80 nationally. It was the first time fuzz tone was used by a guitarist. Travis developed his own style and was copied by others. Rick Hall of Fame Studios would say that Travis was far ahead of his time and that nobody was ready for his sounds when they were recorded 3 years earlier. Travis had more releases on the ARA and Atlantic labels and would continue to do session work and play gigs. Through this session work, Travis’ guitar style would become well known by others and he would soon be part of another up-and-coming studio a little further south.

Rick Hall invited Travis to Muscle Shoals to record at Fame Studio. He would continue his session work at Hi Records in Memphis with Ace Cannon, Bill Black, and others and also work at Fame. There he would be on recordings with the likes of Aretha Franklin, Clarence Carter, Bobbie Gentry, Wilson Pickett, Liza Minnelli, Little Richard, Candi Staton, the Osmonds and many more. The sounds coming out of Muscle Shoals were getting rave reviews. A large part of the respect the Shoals Sound was getting was due to Travis Wammack’s guitar work. Travis had now moved to Alabama and was a cornerstone in the music scene in Muscle Shoals. It was during this time that Travis played a gig in Birmingham and was backed by a local group, the Distortions. This group, another member of the BRC Music Hall of Fame, took their name from a Travis Wammack record of the same title. Travis liked the guys enough that he asked them to do some more gigs with him. They did some dates together in small Alabama towns as well as Memphis and Dothan. At the Dothan gig, they were an opening act for the Everly Brothers. They also recorded some cuts together in Muscle Shoals.

He released 2 albums, recorded at Fame, in 1971 and 1975. His guitar work can be heard on records that have sold over 60 million copies. Other artists became aware of Travis’ guitar and wanted him to tour with them. Peter and Gordon, after hearing “Scratchy”, hired Travis’ trio to tour the world with them. He was Little Richard’s band leader from 1984 to 1995, again traveling around the world. He was part of many nationally-syndicated television programs and performed at Bill Clinton’s inauguration party. Led Zepplin guitarist, Jimmy Page, told Travis that the song inspired him to go full tilt into the music business and an Aerosmith guitarist said that when he heard the song he knew he wanted to become a professional guitar player.

Rolling Stone Magazine referred to Travis as “the fastest guitar player ever heard, and not just fast but good. Brilliant, even. His stage show is flamboyant and exciting.” Reviewer and critic Greg Shaw said Link Wray and Travis were the original experimental stylists of rock guitar. Sam Phillips said of Travis – “He’s the greatest rock and roll guitar player around.” Travis is a member of the Memphis Music Hall of Fame, the Southern Legends Entertainment and Performing Arts Hall of Fame, and the Rockabilly Hall of Fame. He has received the Professional Musician Award from the Alabama Music Hall of Fame. In 2006, Gibson Guitars presented Travis with a new Gibson ES-335 guitar as part of their honoring of legendary Gibson EX series players. Today Travis is a producer – working at Muscle Shoals Music Marketing. For fun, he enjoys hunting rattlesnakes. 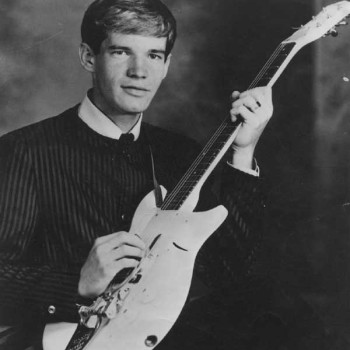