In the fall of 1970, Jerry Ryan and Bobby Horton, friends at Samford University in Birmingham, were asked to play at a folk festival 40 miles north of campus in nearby Horsepens 40, an outdoor festival retreat center. Jerry, a guitar player, and Bobby, a banjo picker, earned $15 each for their first performance together – a seven-song performance.

At the suggestion of mentor and friend, George Pruett, they looked to add a bass player who was a vocalist to ‘round out the sound’. Bobby knew a fellow student, John Vess, who was added to the duo as they became the group who truly brought bluegrass-folk-comedy to Birmingham. The first “Three On A String” band made their debut performance for an audience of eight at a small local club in Homewood called the Lowenbrau Haus.

The Lowenbrau was an intimate pub that opened in the early 60’s in the basement of a Jack and Jill shoe store where you had to know where you were going to find the alley entrance. It is hard to say whether the Lowenbrau caused the success of the “String” or the String was the reason for the success of the Lowenbrau. Whichever, the combination proved immensely successful for both – the String playing there regularly to packed houses for most of the 20-year entirety of the Lowenbrau. Playing a stint for a year at the Cadilac Café on Southside exposed them to even larger crowds. Later they called the Stage Door in Homewood home for seven years.

Three On A String have performed for presidents Ronald Reagan and George Bush. They have performed with nearly a dozen symphony orchestras. They have opened for such acts as the Statler Brothers, Hank Williams, Jr., the Oak Ridge Boys, and Brenda Lee. They have performed on Ralph Emory’s morning TV show in Nashville on WSM-TV and were invited by Ray Stevens as guests on “Nashville Now”. The group has been on Tom York’s “Morning Show” here locally on Channel 6 TV. They have been taped doing live performances many times for TV audiences – one earning the prestigious Birmingham Obelisk Award (a local Oscar-type honor). They have been inducted into the Alabama Music Hall of Fame receiving the distinguished Governor’s Achievement Award.

The String have recorded quite a few albums over the years – the first being simply introducing “Three On A String” – an all-night recording marathon on May 1, 1974 at Don Mosley’s Sound of Birmingham studio on the Bessemer Super Highway; the second entitled “Mirth and Merriment” – an interesting project at Ed Boutwell’s studio on 7th Avenue South in Birmingham where club regulars were invited as guests to sit on the floor and be an audience – free libations were distributed which was deemed a mistake after a delay occurred while chasing down the misplaced bass fiddle. Many other albums followed – including the well-received “Going Places”.

The String once performed for an audience of 101,000 (including Bill Cosby) at the Chattanooga River Band Festival. Feeling cocky the next morning, they were brought back to reality when only 12 early risers showed up for their morning opener. They have traveled performing literally all over the United States and even into Canada in their trusty van named “Skippy”. The band has played everything from common picnics to lumber yard parties to even divorce celebrations.

There have been 18 people that have appeared as members of the group from one time to another. Interestingly none of the bass players had ever played a string bass prior to joining the band. Some of these members have been Joe Estes, Shelton Harden, Andy McGinnis, Terry Ryan, Gordon Burt, Mark Weldon, Cline “Rowdy” Yates, and Dick Wilson. The current bassist, Brad Ryan, who is Jerry’s son, has been the bassist for the group for longer than all of the other bassists combined.

After 37 years, Three On A String is still performing their great audience-enthralling form of music combined with a huge dose of comedy. Their famous skits include “More Door”, “Kawliga”, the “Lightning Bug “award, the “prom”, the “pep rally”, and the “parade”. What makes them so special to all of us who have enjoyed them over the years is that they still open their performance with the statement “We’re here to have fun!”. 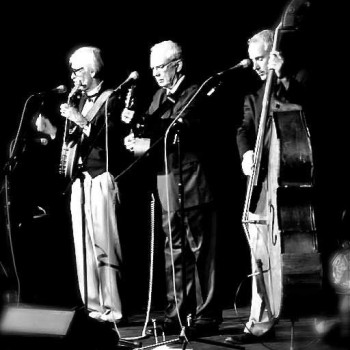