Larry Parker has been rockin’ since 1956, when he first appeared onstage at the Alabama Theatre in Birmingham for Jim Lucas’s Teen Time Talent Search. Jim Lucas, a DJ at the famous teenage hotspot, the Skycastle, located at Eli’s Drive-In, told Larry then that groups were hot at the time, so after his solo performance, Larry organized his first of several doo-wop groups. This first and most notable of these acts was the ‘Swing‘n Teens’. Appearances by Larry along with Rodney Richmond, Wayne Russell, and Tommy Clements on television and stage, and their voices being heard on radio commercials, backed by the Nomads, gave them recognition as Birmingham’s hottest vocal group at the time. The commercial for Liberty Trousers ‘Skeet Pants’ entitled “Skeets Are Neat, Little Mama” was so popular that records were sold at the radio stations that played it. The ‘Swing’n Teens’ sang hit songs of the day made popular by such vocal groups as Danny and the Juniors, the Midnighters, the Del-Vikings, and the Diamonds. Any song that was popular, they learned to perform with perfect harmony.

Larry, an innovative student at Woodlawn High School, had organized a talent show that shocked the teachers and the principal – when his group sang “Little Girl of Mine” and “Come Go with Me”. When the students began clapping and shouting with approval, Larry’s group was told to leave the auditorium. Rock ‘n Roll had indeed arrived at Woodlawn.

A summer job as a disc jockey at WIXI AM-1480 radio in Irondale gave Larry access to the studio and recording equipment after hours. Larry, along with guitarist Hal Painter and a couple of friends, borrowed two guitars and amps and a part of a set of drums, and here on a late summer night Larry wrote and recorded his soon-to-be hit “Panama City Blues”. The station played the song on the air the next day and the teenagers loved it. When Larry needed a label to release “Panama City Blues” on, Mr. Homer Milam allowed Larry to release it on his own local Reed label because, as Mr. Milam said, “It’s a hit!”.

With the release of “Panama City Blues” in the summer of 1960, Larry formed the group called ‘Larry and the Loafers’. The group was comprised of local multi-talented musicians – among them Charles Giambrone on vocals, bass, trumpet, guitar, piano, and drums. Charles later performed with ‘Bob Cain and the CainBreakers’ and also had his own group – ‘Just Friends’. The Loafers’ drummer was Dale Serrano, another multi-talented local who brought his dance and show background to the group. Wayne Gross on guitar, saxophone, and clarinet and Johnny Nations on piano and vocals rounded out the band.

Many of Birmingham’s top musicians served a stint as members of the Loafers over the years and have added to the legend and mystique of ‘Larry and the Loafers’.

In 1983, after a midnight phone call from Dale Serrano, the idea to have a Rock ‘n Roll reunion for Birmingham local bands was born. In June of that year, the Boutwell Auditorium was the scene of “The Rock ‘n Roll Reunion”, Birmingham’s best live in-person stage show ever. Performing artists included Sammy Salvo, Henry Lovoy, the Rockin’ Rebellions, the Premiers, the RamRods, the Nomads, Rooster and the Townsmen, and others – headlined by Larry and the Loafers – all encouraged and promoted by the legendary Duke Rumore, Birmingham’s godfather of Rock ‘n Roll.

Larry Parker, as Larry and the Loafers, has recorded on Heart Records, Ed Boutwell Studios in Birmingham, with musicians Ronnie Eades, Barry Beckett, Glen Lane, and the ‘Roulettes’, Bill Lowery and Master Sounds Studio in Atlanta where he wrote and recorded “Let’s Go to the Beach” (co-written by Emery Gordy who later produced for the group Alabama and played with the Atlanta band ‘St. John and the Cardinals’, and Fame Recording Studio in Memphis with producer Sonny Limbo where he joined the ‘Hombres’, Booker T. Jones, and the ‘Memphis Strings’ and recorded “Sunshine” and “Paper Man”.

Larry, as of this date is alive and well, and is stage-bound with a new ‘Larry and the Loafers’ band on the “More to Follow Rock ‘n Roll Tour”. Larry has been a longtime member of the Birmingham Record Collectors and is always good for one of his million fascinating stories about his life in music and performing. He is truly appreciated for the fond musical memories he has created for his vast listening audience of fans and is truly loved by all of us who are lucky enough to know him personally. It is most deserving that our Larry Parker be honored as an inductee into the 2006 Class of the BRC Music Hall of Fame. 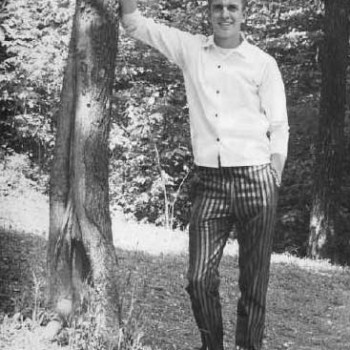