During his more than 30-year career in Birmingham radio, John Ed Willoughby is best known as the “John Ed” half of the forever popular morning radio show, “T.C. and John Ed” which aired most of his career on AM stations WSGN 610 and then WERC 960. Teaming with the late Tommy Charles for almost 22 years, he was part of the longest running morning radio program in Birmingham.

John Ed’s radio career began in 1975 at WSGN when, as a listener, he simply “called in” to D.J. Tommy Charles, and somehow ending up on the show as a regular co-host of T.C.’s, with the show and the duo becoming an instant success. Their program was Birmingham’s top-rated morning show for 8½ years. In the beginning it was all about the music, and although the latter part of his radio career was doing “talk radio,” the music was always there in John Ed’s life. This included everything from recording his own version of “Lucille” entitled “Lucille-2” to co-hosting music shows at the Morris House on Morris Avenue in Downtown. To this day, his show’s theme song remains “Last Night” by the Mar-Keys – the same song he has been signing off with since his original days with T.C.

From WSGN, his show moved to WVOK for a short time, and then to WERC for over 10 years. After Tommy’s untimely death in 1996, to continue his morning radio show, John Ed was joined by another Birmingham radio legend and fellow 2006 BRC Music Hall of Fame inductee, Doug Layton. After moving to WAPI in 1998, his full time radio show ended in 2005. He currently co-hosts a Saturday morning radio show on WJOX (formerly WVOK) along with Doug Layton.

A native of Birmingham, John Ed graduated from West End High School where he achieved stardom as quarterback of the football team and captain of the basketball and baseball teams. After graduation, he attended the University of Alabama. His business success includes his family furniture business, Willoughby Furniture Company in Fairfield, and Rossi’s Italian Restaurant on Highway 280 in Mountain Brook. John Ed has also been recognized for his success as the legendary coach of the Cahaba Heights Black Knights youth football team – where his teams won eight league championships and one national championship. He is renowned for the football plays he created and named and the creative nicknames he gave many of his young players.

A much sought-after master of ceremonies and after dinner speaker, John Ed continues to serve as the advertising spokesman for his many advertising clients.

In recognition of his many contributions to Birmingham radio and to his long career serving the listening public via the radio airwaves, the Birmingham Record Collectors are pleased to induct Birmingham’s own John Ed Willoughby in to the BRC Music Hall of Fame Class of 2006. 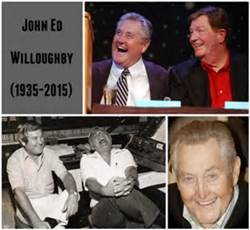