Joe Rumore knew at an early age that he was destined to a career in radio. Born on July 17, 1920, Joe came into the world “making a lot of noise.” At age 7 Joe made his radio debut on Station WJOE, as Master Rumore. Young Joe rigged up a make-believe microphone by nailing a tea strainer to a cigar box. With an ancient Victrola and a pair of ear muffs doing duty as turntable and earphones, Master Rumore broadcast over Station WJOE for 3 years before he got his first piece of mail. It just so happened that Master Rumore had written the letter, a letter of lavish praise and caustic criticism, to himself. Master Rumore acknowledged the letter on the air at Station WJOE and promised to do better in the future. Joe kept the letter in his mind throughout his school days in Birmingham, with every subject Joe studied had to answer the stern question, “How will this help me in radio?” Joe graduated high school in 1941, and studied music, learning 4 complete operas.

Joe Rumore’s “real” radio career began right after high school in 1941. Joe’s first radio employment was with WJLD in Bessemer, AL, for $12 a week with friend Leland Childs. Joe ran the gamut of jobs there from writing commercials to producing his own shows.

One year later Joe literally flew to WSFA, in Montgomery for three times his salary at WJLD. Joe stayed at WSFA for three months before returning home to roost in Birmingham. On April 18, 1943, Joe Rumore made the ride to Alabama’s favorite station at the time, WAPI, “to bring the country to the city folks.” Joe was dubbed “Hill Billy Rose” as he hosted the popular Saturday night show, “Round-Up”. In the early days of his stint at WAPI Joe was at odds with the FCC, for talking directly to persons in his live studio audience (yes, a live studio audience!). Normally in these early days of radio, getting heat from the FCC would mean a death note to a radio career. Not so for Joe. He continued to talk to his audience “confidentially”, and Joe’s popularity continued to grow.

His “Round-Up” program was opposite Don McNeills “Breakfast Club”, considered by most as the most popular show in Birmingham at the time. Joe’s ratings were equal to McNeill’s ratings, if not better in some instances. Joe started to announce other programs during his stint at WAPI. In addition to “Round-Up Time”, Joe announced “Yawn Patrol”, dubbed “WAPI’s Early Morning Eye Opener”. “Yawn Patrol” quickly became one of the most popular morning shows in Alabama, with both the listening audience, and with sponsors. Joe’s list of sponsors included the Alabama Farmer’s Store, Sunway Vitamins, Peruna, Kolor Bak, And Mother’s Best Flour and Feeds. An example of Joe’s popularity would be the large chain reaction of fan mail every time Joe mentioned the name of a patient that was shut-in, and asking the audience to write in. While at WAPI Joe regularly received more than 2500 pieces of fan mail each week, attesting to Joe’s enormous popularity.

In 1948, Joe made 2 major changes in his life: He wed Angie in April, and in October Joe Rumore moved to WVOK, where he would stay until his retirement, in 1982.

Young Joe Rumore had developed a following, both in listeners and in sponsors. Joe had a unique situation with WVOK dealing with both his sponsors and his listeners, both situations intertwined into each other. In dealing with his sponsors, Joe would buy time from the station, and then sold the time directly to his sponsors. This plan worked perfectly. Making this plan work was the fact that Joe had three shows a day. Joe would start the day at 9 A.M. with an hour long show for the housewives who listened. Joe would then have a show from 12 to 12:30 P.M. for the farmers at lunchtime. Not to leave out the after-school crowd, Joe had a program from 3 to 4:15 P.M. On top of this busy schedule, Joe also had a weekly inspirational music program on Sunday mornings. All of these shows were done live. This is unheard of in today’s radio market, both the workload and the live work. Within the first five years at WVOK, Joe had up to 33 sponsors, which included Alabama Flour Mills, located in Decatur, Golden Eagle Syrup, located in Fayette, Sessions Peanut Oil, located in Enterprise, Bell Meade Crackers, and Philco products. Also added within the first couple of years was the second 50,000 watt radio station, WBAM in Montgomery, which was also owned by the same people that owned WVOK, which gave Joe complete statewide and most of the Southeast coverage.

Joe was possibly the only announcer in the state to have a studio audience. The studio audience was treated to products brought by the many sponsors of Joe Rumore. Only Joe and his sponsors knew how much of these products were given away. Joe also had his specific fill-in when he was on vacation; his brother Duke Rumore. Filling in for Joe got Duke a following of his own, and Duke was offered his own show on WSGN, and thus started a brother dominated radio market in Birmingham never seen before or since. In 1954, Joe started broadcasting from his home studio, becoming one of the first to do so. Joe also opened Rumore’s Record Rack in the mid ‘50’s, a staple that was a big part of Birmingham for years to come.

As the other stations in Birmingham would change formats, line-ups, as stations would come and go in the 1950’s ‘60’s and ‘70’s, one thing stayed constant and steady: Joe Rumore. Joe Rumore was a solid number one in his timeslot throughout his career.

Joe Rumore made his last broadcast on January 29, 1982. Just as Joe started his radio career, he finished it on top. Joe Rumore was an innovator and a pioneer in Birmingham radio. Joe’s influence is felt to this day. There are still generations of families that still answer the phone “Joe Rumore.”

Joe Rumore passed away December 20, 1993. His memory and influence lives on. There will never be another Joe Rumore.

The Birmingham Record Collectors  *  Hall of Fame  *  Class of 2017
“Devoted to the Collecting of Music, It’s Preservation and Lasting Friendships” 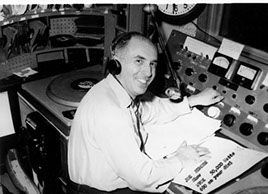