Record labels Reed, Fad, Heart, Colvin, Dial, Chant, Chantain, Century Limited, Argo, and even RCA Victor gave Jerry Woodard a chance at the big time. Jerry was a singer who could sing every kind of music – from rockabilly to sad ballads to novelty to sweet soul to country to blues to spiritual. Everyone who ever worked with Jerry was simply amazed at his ability to sing “Who’s Gonna Rock My Baby” and then immediately switch and sing “She’s a Housewife, That’s All”. Jerry had hits with all of these labels, but just never got promoted to the top. He had been voted the #1 entertainment band in the nation, had song #8 on American Bandstand, and saw many of his 45’s on the charts. Jerry was destined to make it, but did not live long enough to see it happen. 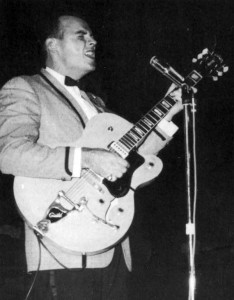 Jerry Eugene Woodard was born in Anniston, Alabama on May 25, 1941. His father was a minister who did not approve of rock ‘n roll and tried to steer the kids away from the devil’s music. Jerry’s friend and fellow performer, Jerry Grammer, said that Woodard always had religion inside him and it reminded him of Elvis and his convictions – “We talked about our past in the “Church” and what we really believed in on numerous occasions. Sometimes we would break into a gospel song in a club. People enjoyed it – even if they were shocked!”

Jerry (as well as his siblings) inherited his talent and lust for music from his Dad who played guitar and banjo and his Mom who played guitar and piano. Jerry’s Mom taught young Jerry the first chords he learned on guitar before he went on to become a music superstar. Jerry with siblings Lee Wayne, Larry Dale, Roger, and Sherree and his parents moved from Anniston, Alabama to Yerington, Nevada when Jerry was 11. Winning a talent contest performing with brother Lee Wayne and another friend in 1952, Jerry did lead vocals on “Mansion in the Sky”. After this, brother Roger says, “Dad brought the family back to Alabama hoping to get the boys out of secular music, but to no avail”.

In 1955 they were living in Tuscumbia where Jerry met his future wife Margie who he married in 1958. Shortly after this, Jerry and Wayne got a daily 50-minute radio show on WHTB in Talladega doing rock ‘n roll. The show was very popular. Here at WHTB, Jerry met another musician who also had a show that was successful as well. His name was Bobby Mizzell. Because of their common love for rock ‘n roll, boogie woogie, and rockabilly music, they hit it off as friends and musical partners where they cut their first records together at the station – “You Are My Sunshine” and “You Don’t Love Me”.

Jerry and Bobby arrived in Birmingham in 1956 to begin working on Country Boy Eddie’s morning TV show. They also worked on Tom York’s morning TV show. Here they formed their first band together. In 1956, Jerry started his own record label “Fad” – where he recorded the label’s first record “Six Long Weeks”/”Blue Broken Heart” backed by Jerry Reed on guitar and Charles Matthews on piano. He then followed with the rocking “Downbeat”/”Our Love and Romance”. In 1958, he recorded for Reed his best known release “Who’s Gonna Rock My Baby” which was later recorded a little more bluesy and released again on Reed. The sound caught Chet Atkins’ attention at RCA Victor where they really toned it down and released it nationally where it had reasonable success as a teener record.

Around 1959 with both Jerry and Bobby having success on their own and each wanting to start their own band, they parted ways going in different directions with Bobby staying with his rockabilly and boogie woogie roots and Jerry exploring other styles, such as pop ballads, doo wop, R&B, and soul Jerry formed the Esquires consisting of Dinky Harris on guitar, Doc Watson on bass, Barry Beckett on piano, Ronnie Eads on sax, and Johnny Carter on drums. With the Esquires, Jerry recorded smoother sweeter pop records. They appeared on many radio programs at the time as well as performing live gigs. It was also in 1959 that Jerry’s daughter Georgenia Lee was born, with son Jerry, Jr. coming along in 1961. 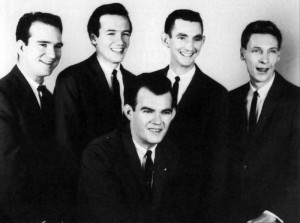 Heart and Colvin record labels owner Charlie Colvin released a number of Jerry’s records on the Heart label, but the most interesting 45 is the 1960 release on his Colvin label. The song “You Just Wait”, written by Kenny Wallis was pressed as the flipside of a song written by then bass player Henry Strzelecki called “Long Tall Texan”. The record was also released on the Century Limited label out of Jackson, MS. The song fit Jerry well – as he could do any kind of narrative in the middle of a song. It did fairly well, but when Murray Kellum released it on the M.O.C. label, it went up the charts becoming a national hit for him in 1963.

Moving his family to Pensacola in 1961, Jerry played the Sahara Club there for two years. Following this success, he then started Jerry Woodard’s Cock Rouge club which burned to the ground devastating Jerry financially. Friends helped him start another club two weeks later and the Flaming Cock Rouge club flourished with Jerry performing to huge crowds until an IRS audit left Jerry in financial ruin once again. At this point, in 1967 Jerry and his family moved back to Birmingham and with help from brother Wayne released a record on the Chantain label. In 1968, he also had some success with a soul- flavored record on the Chant label.

Also in 1968, while working at the Domino Club in Atlanta, he was offered a gig at the Golden Isles Club in St. Simon’s Island on the Atlantic coast of Georgia. He moved his family there where, after this gig, he opened a new club called the Gilded Cage that he operated and played in until 1977 when the nearby Navy base began closing down. Jerry and Margie stayed there until his untimely death on August 9, 1980 from the toll his body had taken from the many years of performing – lack of sleep, hectic schedules, and the health effects caused by alcohol and drugs needed to keep up with such a life.

Jerry Woodard loved life and he loved music. Jerry fought an inner battle within his soul. Being brought up in the Church, Jerry struggled in his heart with playing the music he loved and wanted to perform. Maybe that struggle is what gave him the uniqueness he brought to all of his music. Everyone who ever heard him sing loved him – musicians, singers, producers, club owners, fans. Jerry had that rawness in his voice that was perfect for a rocker, but he could switch to a tender ballad with a warm softness in his voice that very few are blessed with. 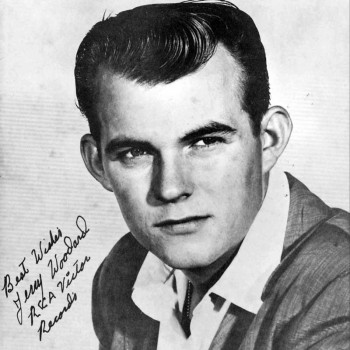