Bessemer resident Henry Gipson is known worldwide for his Saturday night backyard parties. These parties are a coming together of all peoples who share Mr. Gipson’s love of music, particularly blues, gospel, and country. Since 1952, this gathering spot for those who love to play the blues – the likes of Kenny Brown, Shar-Baby, Clay Swafford, Chris Simmons, Johnnie Reese and Kent Duchaine, to name just a few – and those who love to listen, has been known simply as “Gip’s Place”.

Mr. Gipson was born on a plantation in Perry County, Alabama, southwest of Selma, according to the family Bible. Raised there and, later, in Bessemer, his love of music began in church and graduated to small juke joints. He began singing the blues, playing harmonica, piano, and then guitar. Because of his love for his church and God, he spent four years in Huntsville at Bible college. To this day, he will quote you scripture any time he thinks you need it.

In the early 1950s he began sharing music with the kids in his neighborhood and teaching them to play guitar. These small lessons evolved into the famed parties of today, where crowds of hundreds from all over the map gather in Gip’s backyard to sing the blues. It’s hard to describe the feelings you have after spending an evening at Gip’s Place, but it’s an experience you won’t soon forget. The party always begins with a prayer and, by the time it ends, you all feel like family.

Every Saturday evening, Mr. Gipson himself plays and sings for the eager crowd. He then turns the microphone over to some other artist who stopped by for the honor of playing at Gip’s Place – folks like Earl “Gator” Williams, Mojo Child, Johnny No, Willie King, Debbie Bond, Randy Buel and Bobby Rush. Other bands you might have caught some Saturday night at Gip’s include Microwave Dave and the Nukes, Elliott and the Untouchables, Robin Bibi from London, Todd Simpson, and Big Al and the Heavyweights. During the party, Gip meets and greets with his visitors, shaking hands and posing for pictures while the music greats play on his stage. Over the years, party after party, Henry Gipson is now one of the most photographed people in the world, having had his picture taken tens of thousands of times. 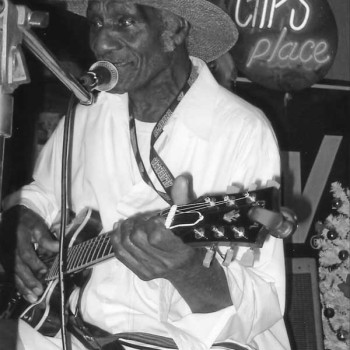