“You’ve captured lightning in a bottle.” That is what a record collector from Britain who owns a record store in Nashville said to Dinky Harris when they were discussing Dinky’s recording of “She Left Me Crying”. That 45 has become highly sought after by music collectors worldwide. The amazing thing about it is that it was captured with one cut of the song.

Derron Doyle Harris was born in Cordova, Alabama in 1938. He came from a very poor family as were so many in the area. Dinky recalls having to move buckets around inside the house to catch the rain that was leaking in. Dinky’s family moved to Birmingham in 1945 living in different areas but residing most of the time in an area known as the Fountain Heights section of town. He attended Martin Grammar School and Phillips High School.

Unlike so many other stories where a kid’s love for music and performing came from a musical family, Dinky’s desire and drive to perform came from listening to the radio. He would listen to the local stations but mostly the black radio stations here in Birmingham and hear DJ’s such as Shelley “The Playboy” Stewart. Some of his favorite singers at the time were Lightnin’ Hopkins, Lightnin’ Slim, and Jimmy Reed. Years later someone would even enter one of Dinky’s 45’s in a Jimmy Reed sound-a-like contest sponsored by a radio station in New York City. Wanting to be a singer led Dinky to join the Twenty Sharps Vocal Club while attending Phillips High School. This club was his first real exposure as a participant in any type of music.

Dinky’s first public performance was at the Horace Heidt Amateur Hour which was being held in Birmingham at a Masonic theater that at other time would have vaudeville acts perform and showed movies. He had become a fan of Johnny Ray so he chose to sing Johnny’s hit song, “Cry”. Dinky would even get down on his knees during the performance as Johnny Ray would. Johnny Ray had become such a favorite of Dinky’s that once when Ray had a show date in the Birmingham area, Dinky and a friend walked nearly ten miles to see him perform. When they arrived, however, the boys were not allowed in because they were not of age to get into the night club. But the two boys ended up talking their way in and were placed at a table in the balcony so that no one could see them, but Dinky got to see one of his early singing mentors. After the show, the boys walked the nearly ten miles back home arriving around dawn the next morning.

After high school, Dinky was re-united with a friend by the name of Carl Hanson who happened to play the guitar. The two of them along with a friend of Carl’s who played bass and guitar formed Dinky’s first band. Dinky was sacking groceries at the time, so he was able to buy a set of drums on credit. The bass drum had a spade on it, thus the group became the Spades. Dinky knew a guy who was a race car driver so he would sometimes go with him to Birmingham International Raceway. At one of these races there was a driver who needed some work done on his car but had no tools. Dinky had some tools, so they got to know each other. The car was named “TV6” and the driver was Jerry Woodard. At this time, Jerry was a band member with Country Boy Eddie, and they were performing on one of the local TV stations, Channel 6. Another member of that group was Bobby Mizzell. With Jerry Woodard’s guidance and leadership the three of them would stay together and, along with Johnny Carter and Frankie Benefield would become the new revised edition of Dinky Harris and the Spades. They performed all across Alabama and into parts of Georgia and Tennessee. They performed at well-known local nightspots such as Pappy’s Club and the Allstate Club, did many National Guard Armory shows, performed at the Homewood Theater, and they even performed at a Dairy Queen grand opening in Sylacauga, Alabama where, on a “hot as blazes” day, they were set up on the roof of the building. They were very popular at the West End Theater performing there after movies such as “Go, Johnny, Go” and “Rock Around The Clock” were presented. The manager of the theater said he booked the guys for a return appearance because “there was such a demand for the boys” by the audience.

In 1959, with these band members, Dinky recorded his first record – which happened to be “She Left Me Crying” – written by Jerry Woodard. It was recorded at Homer Milam’s Reed Studios, which was a well-known studio located above a restaurant in downtown Birmingham. WYDE disc jockey, Duke Rumore, had a call-in request show at the time and Dinky’s record was the #1 song on the station due to its popularity. Dinky went on to record more records under other names – Dinky Harris and the Nuggets, “Linda”, Dinky Harris and the Draft Dodgers, “Who’s Gonna Rock My Baby”, Dinky Doo, “Think It Over, Baby”, and Dinky Harris, “I Need You”. But then around 1962 Uncle Sam called, and Dinky’s Air National Guard unit was activated and off to France he went. After returning a year later, Dinky found that he had lost his momentum and his drive to continue his musical career. What Dinky didn’t know was the plan that God had for him. Dinky attended college at UAB, Samford, and Southeastern Bible College. In 1965 Dinky entered the ministry – first doing mission work in New Mexico with the Navajo Indians. He continued his ministry in Illinois, moving there in 1977. He is still a pastor and resides there today with his wife Nancy. He and Nancy have four daughters and numerous grandchildren. Dinky also is an accomplished bowler having his PBA card and also having bowled many perfect 300 games in his career. Today Dinky’s “lightning in a bottle” can be found in John 3:16 – “For God so loved the world, that He gave His only begotten Son, that whosoever believed in Him should not perish, but have ever lasting life.” 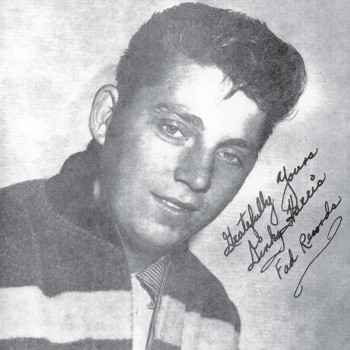