Bobby “Fats” Mizzell was born in Childersburg, Alabama, on May 4, 1937. A few months later, the family moved just down the road to Sylacauga, Alabama. At the very young age of 8, he became a member of a local country group called the Johnny Robinson String Band. Bobby also became a member of a kiddie club affiliated with Sylacauga radio station WFEB where local kids had a chance to show off their musical skills. In the early days, WAPI-TV would go from town to town in Alabama to feature local talents on television. Bobby won a contest representing his home town of Sylacauga in this talent search by playing “The Tommy Dorsey Boogie” on the piano. At the time, L. R. Ross, who worked at radio station WFEB in Sylacauga and WMLS in Talladega, and a friend of his handled the very first “recording session” with Bobby with a simple tape recorder.

Bobby Mizzell is very often associated with Jerry Woodard. They met at radio station WHTB in Talladega, Alabama where each had a 50-minute show. The two worked together performing and recording with the same band off and on during the ‘50s. Bobby and Jerry came from similar backgrounds and both liked rockabilly, rock ‘n roll and boogie-woogie. Bobby remembers cutting songs at WHTB on the Old Talladega Highway. The first ones were 45 rpm demos entitled “You Are My Sunshine” and “You Don’t Love Me” which were never released but are available on a re-issue White label LP out of the Netherlands.

Bobby and Jerry soon left Talladega for the big city of Birmingham in early 1957. They worked in television with Country Boy Eddie on his early morning shows on WBRC-TV and Tom York’s show on WAPI-TV.

The duo formed a band and began performing at clubs in Birmingham like the Starlighter Club, Pappy’s Club and at the Escape Lounge backing vocalists Sammy Salvo and Len Wade (who Bobby recorded on his record label singing “Found Someone” written by Bobby). In addition to performing at the piano, Bobby was a vocalist; Jerry played guitar and was also a vocalist. Other band members included Newman Cohely on guitar, Billy Self on drums, Tommy Willingham on drums, Lee Hood Carzle on bass, Johnny Carter on drums, and Sam Newfill on guitar.

In the meantime, Bobby got his Kim Record label started (named after movie star Kim Novak) while Jerry formed Fad Records. Bobby released boogie rockers like “Rock and Bop Blues,” “Birmingham Boogie,” and “Knockout” (sometimes referred to by record collectors as the greatest piano instrumental ever recorded). Bobby also worked as a session musician for many young artists in the Birmingham area. As a session player in the ‘50’s, he was paid scale and had no further hold on his work. The studio used for many of these recording sessions was the legendary Reed Recording Studio at 1917 First Avenue North in Birmingham. Bobby and Jerry also had several releases on the Reed label near the end of the decade. Bobby’s first contribution to the Reed catalog came on a 45 he shared with Jerry. Jerry did “Don’t Make Me Lonely” and Mizzell had the instrumental “Atomic Fallout” as the flip. In that same year of 1959, a second single was released on the Reed label – “Heart and Soul”/”Same Thing” – the latter with vocal by Jerry’s brother Lee Wayne Woodard. Interest was shown in these two songs by 20th Century Fox and they leased them for nationwide distribution on their 20th Century Fox label in late 1959.

The two pals used these same band members off and on during the first years in Birmingham. They backed many of the big name singers from the ‘50s like Buddy Knox, Jimmy Bowen, Mark Dinning, Brenda Lee, George Morgan, Roger Miller, and Tex Ritter who came to small southern towns for shows. Eventually, they parted company because each wanted to go in a different direction musically. Jerry tended to like sweet type music with violins and voices, and Bobby still preferred rock ‘n roll, boogie-woogie, and rockabilly. Bobby played mostly in southeastern Texas from 1958 through 1960, and during that time he met two men who were destined to become his managers – Bill Hall and Jack Clement (who Bobby played on his Hallway 45 “Time After Time”/”My Voice Keeps Changing”). Bobby moved to Beaumont in 1960, the same year he was signed up with Phillips records. It was in Beaumont that Bobby was to be part of many recordings on labels like Century Ltd. as Bobby and Glenn Layne, Diamond Jim as Bobby Acorn and The Leaves, and Hall-Way as Neal and the Newcomers. Bobby also played piano for Rod Bernard, Dickey Lee, Jivin’ Gene, and Johnny and Edgar Winter.

Later on, Bobby, after playing some shows in California, in 1966 moved to Los Angeles with his wife and only child, Richard David. His first job there was at Magoo’s on Hollywood Boulevard where he played from 1967 to 1972. He got into the motion picture business as a film editor, restoring old classic films and old offbeat B-movies from the 30’s, 40’s, and 50’s. For a time, he even had his own movie company, Mizzell Films, but the video work put a halt to that. He worked the Los Angeles area as a solo performer and sometimes with James Intveld, who Bobby considers both then and now his producer both on records and in the movie business.

Bobby Mizzell’s music was featured in several movies, such as “Deuce Coupe” where he did “Rocket in My Pocket” and “Now’s the Time to Love Me” and “Red Hot” where he did “Whole Lotta Shakin’”. This recording featured Bobby on the piano and James Intveld on vocals. But his piano work best remembered is his playing on the Big Bopper’s “Chantilly Lace”. He also added his expertise to Johnny Preston’s “Running Bear” and Dickey Lee’s “Patches”.

Around 1985, Bobby sought out a long-ago friend, boogie-woogie legend Hadda Brooks and convinced her to come out of retirement to occasionally join him as his guest at the piano bar in the Tam O-Shanter in Glendale, California. Brooks’ credits include the role of the piano player in Humphrey Bogart’s movie “In a Lonely Place” and “The Bad and the Beautiful” from MGM; and she had a bit hit with her recording of “Humoresque Boogie.” He cajoled Brooks back into the studio to record “Palm Springs Blues” and “House of Boogie-Woogie.” Bobby composed, produced and released both tracks on his Kim label for the Hadda Brooks Trio.

In between songs at the piano bar, Bobby tells story after story of his many musical experiences; for instance, how the Big Bopper never traveled with his own band. This fact alone has allowed Mizzell to be a survivor, for he missed the fiery crash that claimed the life of the Big Bopper, Ritchie Valens and Buddy Holly. Bobby might also tell about December, 1985 when he was invited to tour with Rick Nelson. He declined and a week later Nelson and his entire band were killed when their plane crashed in a fiery blaze. Ricky and his band members had been with Bobby not more than a few days before the fatal event in a recording studio near Hollywood at the Baby-O Studios where they were completing what would be Rick Nelson’s final recording – “You Got Me Gone” and “Singing the Blues”. According to Bobby, who played piano on the track, the record was deemed “uncommercial” by the estates of those involved and hence was never released but was recorded on a bootleg.

Bobby is very interested in UFO’s – from his days living in Roswell, New Mexico. One of his companies is Roswell Music. He is a devout record collector and is recovering and re-discovering bits and pieces of his own history little by little. He still collects old boogie-woogie and R&B on 78 rpm records. He admits to being an avid collector of Smiley Burnette (Gene Autry’s sidekick) music memorabilia. He also collects movie memorabilia like lobby cards and posters from the 30s, 40s and 50s.

The Birmingham Record Collectors are proud to welcome Bobby Mizzell into the 2010 induction class of the BRC Music Hall of Fame where we honor him for his many accomplishments in recorded music after his humble beginnings here in Alabama. 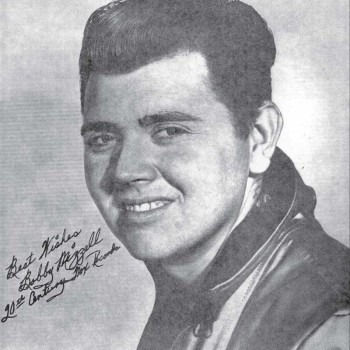