Most of us learned who Ben McKinnon was by listening to Tommy Charles, one of the great DJ’s on WSGN-AM 610 radio here in Birmingham back in the 60’s. Ben was the Vice President and General Manager of WSGN at the time, later retiring as President of WSGN in 1982. Under Mr. McKinnon, WSGN became one of the top rock ‘n roll stations in the country.

Ben has accumulated many accolades in radio, advertising, and community service – among them the South Carolina Broadcasters Silver Plate Award; Governor (7th District) of the American Advertising Federation; a Birmingham Ad Federation Silver Medal Winner; an Alabama Broadcasters Association Broadcaster of the Year; and the NAB 2000 Executive of the Year.

BRC honors Ben McKinnon for his contributions to Birmingham radio through his years with WSGN. 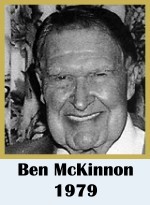